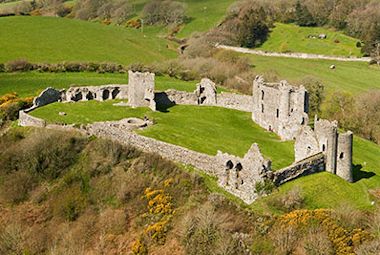 Llansteffan Castle can be found on a headland overlooking the estuary and sand-flats of the mouth of the river Tywi. It is easy to see why the location was chosen by the Normans to build their earth and timber structure early in the 11th C. The natural defences and the strategic position overlooking the surrounding areas and nearby river make it a logical location to build a Castle. The Normans, however, were not the first to understand the benefits of its location. Long before the Castle was constructed an Iron Age hill fort was built on the site dating back to the 6th century B.C. and the double ditch of the fort remains visible on the west of the castle to this day.

The building of the powerful masonry castle we can still see today was the work of the Camville family who held the Castle from the late twelfth to the early fourteenth century. The Castle changed hands several times following battles between the Normans and the Welsh. For instance, the castle fell to the Welsh Llywelyn the Great conquered Deheubarth in 1215. Eight years later William Marshal started the campaign to recover ownership of the Castle and once reclaimed Camville strengthened the upper ward by adding a square gatehouse and a round mural tower .

The Welsh reclaimed it in 1257 and the Camville family again took it back and further strengthening work took place. In 1405 – 06, the Castle was briefly held by the supporters of Owain Glyndŵr in 1405-06.

Visiting the Castle today, it is easy to imagine those great fights for ownership taking place nearly eight hundred years ago. Visit the Castle and you will not be disappointed.